by Raphael Dumas on June 14, 2016 under python-data-science
12 minute read

Clustering groups into similar groups to reduce variance within clusters and increase variance between clusters. Can be used to identify groupings of similar responses (such as for marketing or health-care) or to reduce the number of variables. Cluster analysis is unsupervised: no specific response variable. K-means separates data into an a priori number of n distinct groups by minimizing a distance parameter within clusters.

Conducting k-means clustering with multiple k values can help mitigate 1 and 4. Splitting data into training and test sets shows whether clusters are reliable (2) as well as validation on variables omitted from the clustering process.

For geospatial clustering of points, clustering on the size of each cluster using a hierarchical clustering method might be a better idea since the number of distinct clusters is not known a priori, while cluster diameter may have a logical size, see my example in PostGIS

Continuing to examine factors leading teenagers to have sex

Previously in the Wesleyan Machine Learning course I worked with the Add Health dataset to examine which factors were good predictors of a teen having had sex. Since the degree to which someone would agree with “If you had sexual intercourse, afterward, you would feel guilty” was the most important predictor, in the third assignment I examined what variables were strong predictors of this feeling of sexual guilt using LASSO regression. A weakness of LASSO regression is that it doesn’t identify which variables are correlated, so some variables which were ultimately discounted in the model may help us get a better sense of who is liable to experience sexual guilt. This analysis will attempt to cluster individuals to see which combinations of factor explain a likelihood to express sexual guilt.

Not the first line, which makes plots appear within the notebook

Plotting the average distance from observations from the cluster centroid to use the Elbow Method to identify number of clusters to choose. We want to see where the line kinks and marginal benefit of additional clusters in reducing average distance decreases dramatically. 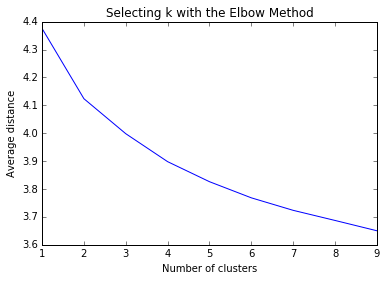 The plot above appears quite smooth, so will select k=4 as the “ideal” number of clusters. Now running Canonical Discriminant Analysis which reduces number of variables to linear combinations of clustering variables in order to plot them on a two-dimensional axis. 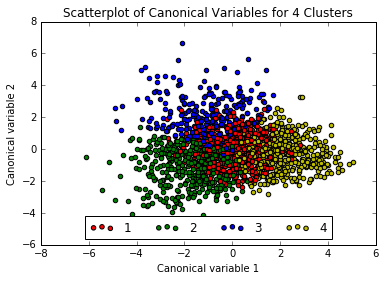 The three exterior clusters appear somewhat distinct, however the center cluster (1, in red) muddles into the others, so will rerun the above with only 3 clusters. 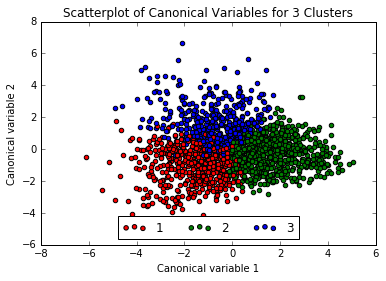 That looks a little better no? Now adding the clusters to the training dataframe. Much easier to understand than the mess of code the instructor gave

Since all of the variables except gender have been normalized, the absolute value of the means gives an indication of how far each cluster is from the mean of each variable. The gender variable is 1 if male and 0 if female, so values below 0.5 mean a cluster has a greater proportion of female teenagers, and above signifies a greater proportion of male teenagers. Cluster 0 seems slightly more Male, cluster 1 is slightly more female, cluster 2 is an even split.

Note: strangely enough my version of the Add Health dataset didn’t have a GPA column… weird. The code below is how I would have done it though…