by Raphael Dumas on June 6, 2016 under python-data-science
6 minute read

In this assignment I continued to work with the Add Health dataset from the previous two assignments (one, and two). I had previously examined which factors were good predictors of a teen having had sex, and the degree to which someone would agree with “If you had sexual intercourse, afterward, you would feel guilty” was the most important predictor. Since LASSO is a form of linear regression, I had to now shift my attention to a quantitative predicted variable, so I decided to examine what factors would predict the degree to which someone agreed with the sexual guilt statement. Lasso regression was performed to determine which of the 19 quantitative or binary predictors would be important.

The data were randomly split into a 70% training set (N=1696) and a 30% test set (N=727). The least angle regression algorithm with k=10 fold cross validation was used to estimate the lasso regression model in the training set, and the model was validated using the test set. The change in the cross validation average (mean) squared error at each step was used to identify the best subset of predictor variables. 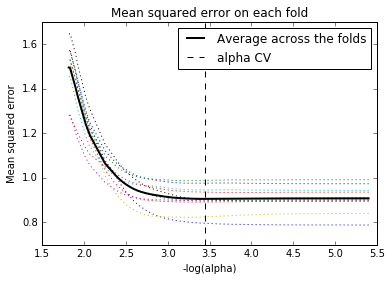 Of the 19 variables tested, 16 were retained in the selected model. The top 5 most important coefficients appear in the table below. Now this doesn’t determine whether any of these variables are correlated with religious strength. But it does show that guilt comes from a loss of respect from peers, upsetting the mother, and the social stigma around accidental pregnancy.

Better prediction accuracy if small number of observations relative to number of predictors Can increase model interpretability. Simpler model that selects only most important predictors