ML Assignment 2: Do teens have sex in Random Forests?

by Raphael Dumas on May 28, 2016 under python-data-science
4 minute read

Previously I had examined what “risky attitudes” were associated with teens having had sex using a classification tree. However, the output was impossible to read, so I had to pare down the number of variables to something more manageable… 3. I learned, it seemed, that guilt was a strong motivating factor in preventing teens from having sex. This week we learned about random forests, which essentially involves creating a bunch of classification trees in order to find out which variables are meaningful (would’ve been useful prior to last weeks paring down…). The full Jupyter notebook from which this post was derived can be found here

Split into training and testing sets

It seems I was correct in the variables I thought were important in last week’s assignment since the top three were the same variables. In descending order of relative importance the forest found: sexual guilt, mother getting upset if they had had sex, the embarrassment of a pregnancy resulting from sex, and then, a new variable, “If you used birth control, your friends might think that you were looking for sex.” Gender had the least importance of any variable.

Investigating Accuracy of Random Forest by Number of Trees 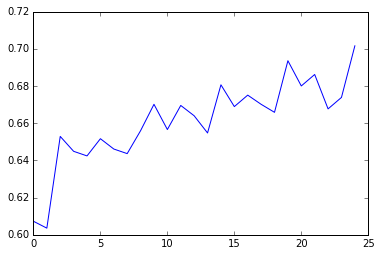 The graph above shows a steadily increasing accuracy with the number of trees run, which implies that multiple decision trees are necessary in order to properly classify the data.